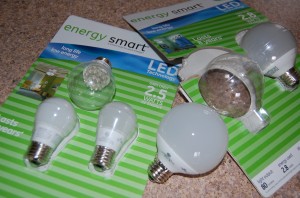 If you know me, you know how I feel about CFL’s and LED’s.  I love them.  I just bought a slew of LED’s for my house at Sam’s Club of all places.  They have not one but five different styles to choose from right now.  I could hardly wait to get them home and install them.  I have to admit that some of them look a little strange considering what one would expect a light bulb to look like.  I was also concerned about how much light they were going to give off considering how bright the LED Christmas lights I purchased last year were, but that’s whole other story.
These lights are beautiful installed.  The quantity of light is perfect, not overwhelming.  The hue of the light is warm, which is good considering I installed them in the fixture over the mirror in the bathroom.  And no, they don’t make me look like I died and was resurrected.  The color is perfect.  A nice surprise was the pattern that the light makes on the wall.  Because the LED’s are many smaller lights each casting their own pattern, the bulb leaves a delicate pattern on the wall that is quite nice.  I think for $5 each, they were more than worth it.
An LED can produce 60 to 70 Lumens of light per Watt of power consumed making them an even better choice for saving cold hard energy cash.  And technology isn’t stopping there.  LED’s are changing rapidly.  The biggest drawback to installing an LED right now is that they cost more than a CFL replacement.  LED’s are the lighting equivalent of a computer chip and just like there is no stopping the advancement of the computer chip industry in making things smaller and cheaper, there is no stopping the LED industry either.  Roland Haitz, a scientist in the LED industry has proclaimed that the “Price will fall by a factor of 10 while performance will increase by a factor of 20.”
This is great news for us consumers!  Saving money on your lighting has never been so easy or with so many options.  To give you a comparison idea when it comes to selecting replacement light bulbs, take this into advisement.  An incandescent bulb rated at 65 Watts produces 52 Lumens giving it and Efficacy (lm/w) of 10.  A comparable CFL rated at 15 Watts gives off 675 Lumens with and efficacy of 45.  A comparable LED rated at 12 watts gives off 730 lumens for an efficacy of 60.  So the choice is between the bulb with an efficacy of 10, 45 or 60.  Knowing this information, who would continue to buy incandescent?
People without all the information, that’s who.  So it’s your job to spread the word about CFL’s and LED’s.  One complaint I have heard is that they aren’t dimmable.  Not so, in fact I am playing with the remote dimmer switch to the CFL over my head this very minute.   You just have to keep in mind that you have less range of dimmable wattage, we are talking about the difference between 65 watt incandescent compared to a 15 watt CFL and you have to make sure that you purchase the ones that say dimmable on the package.
Another objection I have heard is that the color is too harsh.  The original CFL’s were a bit on the cool side.  Color from a light source is described as either cool (blue light) or warm (orange and red), and runs on a sliding scale from one to the other.  The color of the light is measured on the CCT scale and is measured in degrees Kelvin.   For example, most commercial office space is lit by fluorescents which are about 4100 degrees K while most people prefer a warmer color range between 2700 to 3000 degrees K which is where most other household bulbs fall into.  When purchasing light bulbs take your time and read the package, not all lights are the same or are meant for the same type of use.  There is a bulb out there for you that will meet your needs, I’m certain of it.
So what is holding you back?  Change out those light bulbs in your house.  Every CFL that you replace today, will pay for itself in energy savings in 3 months.  There is a reason why CFL’s and LED’s are number one on every single energy saving list!  So let’s change some bulbs!