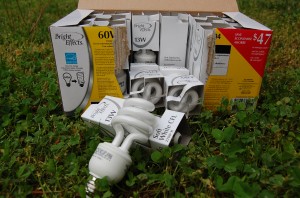 Compact fluorescent light bulbs (CFL’s) are great for saving energy.  If you have been reading my articles for awhile, you know I am a huge fan of things that lower my electric bill.  Switching out all of your standard light bulbs for CFL’s saves you up to 75% on your lighting bill.  It is one of those low hanging fruit items when it comes to energy retrofitting.  Changing light bulbs is easy, any homeowner can do it and the results will be immediate showing up on your very next electric bill.

As awesome an idea as CFL’s are, I still get significant resistance from homeowners when it comes to swapping them out.   One of the most dramatic  reasons for not swapping them out has been the fear about your house turning into an EPA superfund site the first time you break one.  First of all, I have all CFL’s at my house and have for a very long time.  I have never had one break.  In fact, the only time I remember breaking an old incandescent bulb was while I was changing it and since CFL’s last so incredibly long, you end up changing bulbs less frequently lowering your chances of contamination even further.

CFL’s do contain mercury.  In fact, according to the energystar.gov website, they contain 4mg a piece.  This number is going down and as recently as this past year one manufacturer had gotten the mercury content of their bulbs down to under 1 mg.  Advancements in the technology are increasing rapidly.  Usage of the light bulb binds the mercury to the interior of the glass of the light bulb.  So even if you did break one, the entire 4 mg isn’t going to even make it onto your floor.  There are guideline for cleaning up a broken CFL on the energystar.gov website, most of which is common sense like wear gloves and wipe with a cloth that you will not be using again.

To help you better understand how much is 4 mg, think of the thermometers that we used when we were kids.  You know, the ones without batteries.  They contained 500 mg of mercury which would be like 125 CFL bulbs.  I remember breaking one in college chem lab and chasing the little balls of mercury around the lab and I lived to tell about it.

There is a great table on the energystar.gov website that compares an incandescent to a CFL.  Let’s assume that both of these two light bulbs burn for 8000 hours.  During that time period, the incandescent will use much more electricity because it takes more Watts for an incandescent to put out the same amount of lumens (measurement of light) as a CFL.  The amount of mercury released into the atmosphere from the coal burned to illuminate those two light bulbs will be 1.2 mg for the CFL and 5.5 mg for the Incandescent.  Now let’s say that you do a very bad thing after those 8000 hours and you don’t recycle your CFL, but rather throw it into the landfill, crushing it and releasing the mercury within it.  This would add another .44 mg bringing the total contamination to 1.6 mg while the incandescent bulb remains at 5.5 mg since it contains no mercury.  As you can see 5.5 mg released due to the use of the incandescent is more than 4 times the amount of mercury released by the CFL.  And you can even reduce that amount further by disposing of the bulb properly by taking it to a CFL recycling center like one of your big box hardware stores.

So you see that using a CFL is better for you and the environment in every way.  So go ahead and change out those old light bulbs, even if they are still working and put in some CFL’s and start saving yourself some money!  You can tuck those old ones away for your grandchildren’s easy bake oven some day.  That’s about all they’re good for.