I have shared with you some of the things that I have done on my house that I believe are the best practices for building a house.  That doesn’t mean that these ideas will work in every climate zone or wind zone or even for every person.  If I was building in Dade County Florida, the outside of my house would be substantially more armored because that is what works best for that region.  So if you do plan on taking my home construction advice, please take into account where you are planning to build. 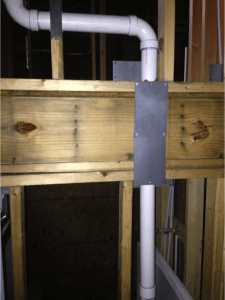 This one piece of advice that I want to share with you, however, applies everywhere. During construction I made the point of running throughout the house and getting pictures of all the locations where HVAC lines went through a wall, or what was happening around the electrical panel, and other such things.  At the time I was thinking that I had taken so many pictures and that it was probably a bit overkill.  Unfortunately, it did not take long for me to discover that I did not have nearly enough pictures of the inside of my walls.

We had designed our master shower with two shower heads and after the tedious process of tiling, the shower was done, (several months after we had been in the house), we attached the shower heads and were excited to have the two heads because each was quite different from the other and we could foresee uses for each of them.  I turned on the first shower head and turned up the hot water and quickly it warmed up, just as it was designed to.  I then turned on the second head and turned it to hot and waited, and waited, and waited… and no hot water.  So I turned it to cold to test to see if the water lines were hooked up backwards, and still no hot water.

Somewhere during our plumbing rough in the shower was hooked up to cold on both sides.  This is not too difficult of a fix, if you know where to cut the drywall.  I was insistant that the connection point was in the wall, my husband firmly believed it was in the ceiling of the bathroom below ours.  Here is where those photos would be very helpful.  I know I am going to have to destroy some drywall to fix the problem, but it would be really nice to know where to start cutting, or at least whether to cut the wall or the ceiling.

Ugh.  So the moral of this story is, you can never have too many pictures. Take them at every stage, and of everything you won’t be able to see plainly once your house is completely finished. Trust me, they will come in handy one day.