Everyone would love to have lower electric bills.  And adding solar panels to your house could drop what you owe the power company each month by hundreds of dollars. 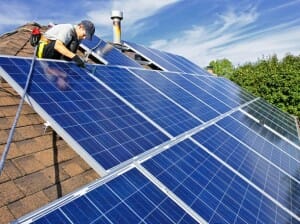 That would be a huge boost to anyone’s pocket book, but the cost of installing solar panels to one’s roof creates a barrier that prevents a lot of people from taking the plunge.  Of course, adding solar panels to lower income housing has the potential of being life change for the residents, especially if they can gain the benefits of solar without the initial outlay of cash to install them.

Recently, Brian Deese, Obama’s senior advisor for climate change, announced that “as part of a bigger- picture effort to try to drive innovation” toward solving climate change issues, the government would be tripling the renewable energy systems on federally subsidized housing by  2020.  He also stated that the administration planned to make it easier for homeowners to borrow money to install solar on their houses.

In addition, Mr. Deese announced commitments from charities and investors of $520 million to pay for solar and other energy efficient projects for lower income communities.

Mr. Deese made this announcement in Baltimore accompanied by Elijah Cummings, the Democratic representative of Baltimore.  Mr Cummings shared something we have found to be a problem with lower income residents, electric bills that can run into the hundreds of dollars each month.  While an electric bill of $400 might  be annoying to you, it could make the difference between being able to purchase food or not for lower income families.

If you too suffer from high energy bills, give me a call and I will come out and show you how to lower those bills during our Home Energy Audit, or by helping you install solar panels to your house!