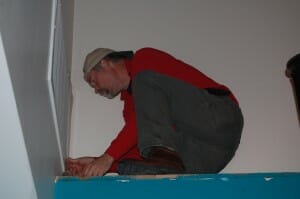 Trained professionals are pretty good at sniffing out duct leakage points.  A professional with a few years under his belt knows right where to go to find those spots that are notorious leakers and can pretty quickly get the total duct leakage under the 8% leakage for an existing house and 6% for new construction to meet the new code requirements if the system isn’t already below the new test levels.

On rare occasions, the leakage is incredibly hard to find.  We tested a brand new system that was in a new house during the rough-in stage of construction.  The duct work tested out perfectly and the HVAC contractor, one of the best HVAC contractors around, was pleased with his duct works performance.  Since the house was being inspected by us to see if it would meet the Earth Craft standards, the system had to be tested again at the final stage.

We came back and hooked up and could not believe the leakage numbers had jumped up high enough to not only not meet the Earth Craft standards, but it didn’t even pass the 2009 Code requirements.  The contractor was as astonished as we were and everyone began crawling around in the attic trying to find the source of the problem.  There shouldn’t be that much leakage, especially since it had been tested just a few short months ago and tested fine.

After inspecting the duct work in the steaming attic, it was discovered that some other contractor had come through to finish something else in the attic and stepped on and crushed a portion of the ductwork causing it to leak.  A quick repair and the duct leakage was down below the Earth Craft levels once again.

The moral of this story is that no matter how long you have been in business or how many miles of duct work you have installed, duct leakage is not always something you can see.  Duct Leakage testing is the quickest and best way to determine how well the system is performing.

But Duct Leakage Testing isn’t just for new duct systems.  It can be a valuable tool when doing system maintenance and repairs as well.  Offering the customer a Duct Leakage test on existing duct work gives the customer a concrete assessment of their overall duct leakage.  Then the contractor can use their experience to sniff out those leaks and seal them up, proving his performance to the customer with a follow up test.  GCI Energy Consultants offers follow up testing at half price ($75) making it a great tool for marketing duct sealing to the customer and giving the customer peace of mind knowing that the third party testing proves that their duct system is performing as well as that HVAC unit that the contractor just worked on!