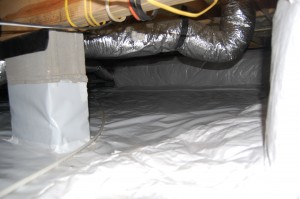 I get asked this question a lot.  Do you open your crawl space vents in the summer or in the winter?  Doing Home Energy Audits for a living, I get to spend a lot of time in people’s crawl spaces.  I have the opportunity to help clients solve perplexing and frustrating problems that are making them lose sleep at night.  Ok, maybe they aren’t losing sleep, but they are pretty frustrated when I get there.

In the past couple of weeks we were called out to not one but two different houses to look at the same issue, extremely damp crawl spaces.  Why should you care if your crawl space is damp you ask?  Because lots of really scary stuff can live in your crawl space if the relative humidity level is over 60%.  Not to mention that moisture causes damage that could cost you a small fortune if not addressed.  And I haven’t even mentioned termites yet, ugh!

The first house suspected they were having issues when their amazingly beautiful hardwood floors began to cup.  Cupping is when the wood begins to curl up on the sides due to excessive moisture on the bottom of the flooring boards, not a good thing.  What makes this even worse is to think that there was enough moisture in their crawl to pass through the plywood subfloor and then affect the hardwood that was nailed on top of that.  That’s a lot of moisture.  The owners had done all the right things to try to address the issue like closing off the crawl space vents using foam board, but the water was coming up through the ground and a less than perfect moisture barrier.

The homeowner had placed the outside unit to his weather gauge in the crawl space and had instantaneous readings of both temperature and humidity levels and knew he had a problem but could not figure out how to address it.  The solution was a work of art.  I know you probably don’t think things like crawl spaces can be beautiful, but the engineer in me loves it when something functions perfectly and at the same time looks pretty darn good.  That is what solved these homeowners perplexing problem.  We plugged a few more holes to the outside and then turned their crawl space into a completely sealed conditioned crawl space with an industrial strength poly on the ground taped and sealed to the insulation on the walls.  Voila!  A work of art.

The second crawl space that I went into still had open vents to the outside and was extremely wet.  On the very hot and humid day that I was under there, it was so wet it was actually raining under there.  Vented crawl spaces seemed like a great idea when the idea was conceived and improvement over the old pier foundations of the past.  However, this was before new construction ideas were actually tested in reputable labs like the National Labs, to find out if the great idea actually worked.

For areas like ours where the humidity levels are so high, vented crawl spaces are a recipe for disaster.  In the summertime, very warm and moist air on the outside of your house is attracted through the open vents in your crawl space because we know that hot goes to cold.  As that very warm air enters your crawl space it is immediately cooled because the temperatures under your house are much cooler than they were outside.  As air cools it cannot hold as much moisture as it could when it was warmer.  Just like warm tea will dissolve more sugar into it than cold tea, warm air holds more moisture than cool air.  Since the cooling air needs to get rid of some moisture quickly it seeks out cool surfaces to deposit the moisture on.  Lucky for the cooling air, your cool floor joists and ductwork are ready and available to receive all the moisture that the air needs to dump.  Not a good thing for you or your house. 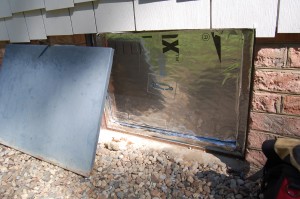 The only way to stop this process is to keep the moisture out.  At the very least, you need to keep your vents to your crawl space closed in the heat of summer (and winter as well, but that’s another article).  An even better solution is to cut foam board the exact size of the vent and press it into place to block all air from penetrating.  The best solution is to completely seal your crawlspace and do away with the problem completely.  Because moist crawl spaces cause the humidity in your house to rise which makes you uncomfortable and makes your HVAC work harder costing you more money.

So run outside, shut your vents and then like our smart homeowner, go buy a remote sensing weather station and stick the outside portion under your house.  Put the inside unit somewhere where you will see it every day.  Then watch…. and learn, that to shut is the only answer!