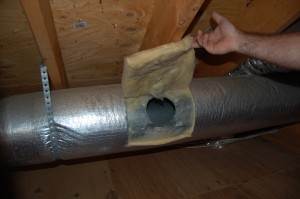 If you are not in the building industry, you probably haven’t noticed that the new 2009 Building Code is being used all around Virginia.  You might think that it’s mighty late to be implementing a code that is already 3 years old, but that is how the code process works.  A new one is written and adopted every three years and it takes a couple of years for it to get to the point where it is the code that the building officials use when they inspect your house.

I have been in the construction industry for some time now and I have to say that the 2009 code had greatest number of changes in more areas than any of the previous codes.  Some of the changes were so large that the state of Virginia decided to have those portions not apply to Virginians like the requirement that all homes have fire suppression sprinklers and the requirement for Blower Door testing to prevent the construction of leaky and drafty houses. L  You can imagine that I was not entirely pleased with the deletion of the Blower Door testing requirement as I am a huge proponent of building more energy efficiently and building a tight home is the single best way to accomplish that.

One new requirement that did remain in Virginia is the requirement that HVAC contractors prove that their ductwork is extremely tight. One way to prove that their ducts are tight is with third party testing from a licensed individual.  It would seem to be common sense to most people that ductwork should be as tight as possible since you are paying a fortune to heat and cool that precious conditioned air and then running it in ductwork that is probably in your attic or crawlspace which are not conditioned.  I spend a lot of time doing Energy Audits on homes and often times that includes testing the home owner’s ductwork for leaks.  Although most HVAC contractors are reputable installers, sometimes things can be overlooked or over the years, things may happen to the ductwork that causes it to leak and waste energy.  The best way to avoid wasting money is to have your ductwork tested for air tightness when it is installed.  Testing your duct system to insure that it is as tight as possible at the beginning of its life will save you a considerable amount of money every year that the unit is in operation.

Another reason to make your ductwork tight is because tight ductwork is healthier for you.  Gaps and holes in your system allow dirty, dusty, moldy air to enter your ductwork and leave a thick layer of allergy and asthma causing dust throughout your duct system.  Think about it, if your ducts are dusty, how did that dust get there?  All the air entering your duct system enters through a filter so if you are having trouble with dust in your ducts, chances are you have some significant leaks somewhere where air is entering your system without first passing through a filter.

I love the story about one of my kids when she was about 3.  Things had gotten pretty quiet so I called from the kitchen and asked “What are you doing?”  The response was priceless: “Nothing, don’t check!”  When I peeked around the corner she was sticking little pieces of paper into a flame and could have caused a terrible fire.  I’m a firm believer in Trust but Verify. Trust is good.  Trust coupled with third party testing is even better.