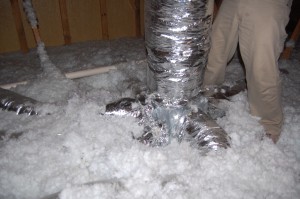 During Energy Audits, I have found all sorts of things in people’s attics.  I have found dead squirrels, birds, bats and one a very, very long snake skin, leaving me to wonder where exactly was the snake?  During a recent Audit, I ran into another type of creature.  This creature lurks silently in homeowner’s attics robbing them of their precious conditioned air!

That creature is the Ductopolis.  The ductopolis is known to exist inside homes all over the United States and can actually be quite costly for the poor homeowner with whom this creature has chosen to reside.  I have included a picture with this article so you can quietly head up to your attic and see if you might be one of those unlucky few.

A ductopolis consists of a lot of flexible round supply duct wrapped in shiny insulation.  The one in my picture is a four legged creature, but the actual number of legs may vary depending on the number of rooms in your house.  The large duct feeds down to a box which has, in this case, four smaller round ducts leaving it.  The large flow of air coming down the main supply line terminating in the box causes turbulence and causes uneven flow to the many legs of the ductopolis.  This means that some rooms get a lot of flow while others get very little.  In fact, that is one of the reasons we were doing this audit in the first place, some of the upstairs rooms were hot while the others were fine.  When this happens, you tend to turn the thermostat down to make the HVAC system run longer to compensate for the poor duct design.  This, of course, costs you money.

If you are having a new system put in your existing house here are the top five things to watch out for:   1. Insist on a rigid duct supply line that gets smaller every time a supply line comes off of it.  2.  Insist that supply line connections not be bunched up together or across from each other.  3. There should be no supply line connections in the last 6 or 8 inches of your main supply line.  4.  Ask that your system be designed before it is installed and ask to see the complete calculations before you sign on the dotted line.  5.  Make sure to tell your contractor you are having the ducts tested for air tightness when he is done and you want the system as tight as possible.  These steps will help you get a system that will operate at optimum performance, saving you money in the long run.

Energy Auditors love testing ductwork, doing our part to rid the world of ductopolii.  These monsters are becoming endangered species though, as more people have their new construction certified through Energy Star, Earthcraft or LEED, all of which do not permit ductopolii of any kind.  So help us in our effort to push for the extinction of ductopolii everywhere.  Making the world a better place, one house at a time.