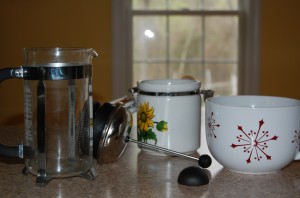 Passive Survivability is a topic that has been fascinating me for years.  The term and concept was first written about by Alex Wilson.  I had been thinking about the topic for years when I first read one of Wilson’s articles on the subject and was excited to finally be able to put a name to the idea.

It all started for me during a huge ice storm that we had back in 1998.  The snow was fairly deep and schools were closed, but the snow wasn’t the major problem, it was the ice.  It coated everything including all the electrical transformers heading to my house and, not being able to vent, they all blew with a loud bang, one after the other until no one had power.  Since the storm blanketed such a large region, it took days, sometimes weeks, for power to be restored.  We were out for 4 days, but I had friends that were down for 10.  This storm was where I began to become keenly aware of how much power we used on a daily basis.  It was here that I began my journey towards energy efficiency.

We had a wood stove insert at the time and I quickly learned how to put large Dutch ovens onto it to prepare the next meal.  It only took 3 hours to make macaroni and cheese!  But at least we were able to eat.  Because we work in construction, there is always a generator or three around, so my husband quickly had us hooked up to power to keep a few essentials running like the refrigerator.  My Aha moment came when I went to make coffee.  While listening to the hum of the generator outside, I plugged in my handy dandy coffee maker, filled it with water and turned it on.  The sound of the generator dragging down in power was eye opening.  Surely this small little appliance couldn’t be the huge draw of power that was making the generator labor so hard.  So I turned it off.  Then on, then off.  Yup, it was the coffee maker.

Trying to figure out what I was up to, my husband came in covered with snow, and asked what I was trying to run.  I just wanted some coffee, that’s all.  Turns out that things that heat up using electricity, like coffee makers, crock pots and curling irons, are called dead end circuits.  They use an incredible amount of electricity to accomplish those little tasks that we find necessary to get through our days.  As soon as the snow cleared, I headed to my local kitchen supply store.  I came home with a French press coffee maker that requires no power at all and a thermal carafe to keep the coffee warm all to avoid having to heat the coffee from the hot plate in my old coffee maker.  Water, I figured, could always be warmed on the wood stove or the gas grill.

I began making a lot of small changes in my daily routine thinking, how I would accomplish this if I had no power, or power was limited.  Then I started thinking about what I would do if the power outage came in the middle of the summer.  The woodstove was great for cooking in the January, but might not be so much fun in August.

Fortunately, or unfortunately, I got a chance to experience loss of power in the warmer months not long after that.  In 2003, after hurricane Isabel, we were without power for 2 weeks.  This time I had the whole coffee thing down, but other problems arose.  I learned how to be really creative with my gas grill, but it wasn’t long before the tank was empty and because of all the chaos, there was nowhere to get gas.  Now what?  It was also pretty hot following the storm.  I quickly became aware that none of our fans were going to help us and the windows in our old house were way too small and not properly located to maximize comfort.

Growing up we spent a lot of our summers in Kansas visiting relatives.  Since absolutely none of them had air conditioning, I was taught the trick of heading to Walmart everyday at the peak of the heat and then learned to shop reeeaaallly sllllloooowwly.  The ability to browse at length was considered a survival skill.  This only works however if Walmart has power and is able to open themselves.

This brings me to the current situation in Japan.  What if something happened and the safest place for you was in your home?  What if you needed the ability to hunker down and just survive for a week, maybe two, maybe more?  Would you be able to stay warm, stay cool, pump water out of the ground, take showers, make coffee?  A very important question to ask yourself.

So now you understand my passion on making houses as tight as they can be so they hold heat or cooling as long as possible, and why I think things like solar hot water heaters are so important.  I never want to take a cold shower again; I had my fill in 2003.  If you want to see how to make your house use less power, drop me an email at e.guinn@DanGuinnHomes.com and I will come out and do an audit on your house and help you lower your energy bills and increase your passive survivability.  There could be a whole host of things you could do to your house to harvest rainwater, increase your houses ability to warm or cool passively or just increase its air tightness.  That’s why you should care about Passive survivability, because coffee is a necessity and cold showers stink.