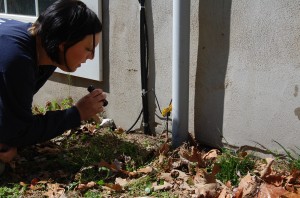 It all started at the end of last summer during a driving rainstorm.  A very large colony of ants moved into my mailbox.  I was so upset, unwilling to surrender one millimeter to these very small and very numerous squatters.  The very next day, I sent my teenage son outside with the pressure washer.  Bye bye ant colony, or so I thought.

Next, we started seeing just a few now and then throughout the winter around the kitchen window.  Just a few at a time.  Being that I have been slowly changing all my household chemicals out for greener versions, I was unsure what to use to kill them.  I clean my counters with a mixture of a small amount of white vinegar mixed with water.  I tried spraying them with that thinking the vinegar would burn and they they would at least turn, tuck their little tails in and run for the great outdoors.  But they didn’t, they just laughed at me.  They don’t mind vinegar, in fact, I think they enjoyed it.

I tried swatting and squishing them, but their numbers just kept growing, and growing.  We hunted outside for where they were coming from three times and couldn’t find them.  It all came to a head last Tuesday.  It was hideous.  I came down to make the coffee, turned on the light, and they were everywhere.  They were streaming out of the outlet covers, all over the sink, counter, walls.  Everytime I brushed up against the counter they grabbed hold of my robe and came at me in a full frontal attack.  They were crawling all over me.  I couldn’t take it anymore.  I had had enough.  As much as I hate chemicals, I needed help and I needed it now.

My husband, equally opposed to chemicals, knew who to call.  He handed me a bottle of window cleaner and told me to keep them at bay, he would be calling Ashley, she would know what to do.  The very next morning, Ashley the Ant Lady arrived at my home armed with a flashlight.  I figured she was going to need a whole lot more than a flashlight to get rid of these pests, they were relentless.  But I just watched.  When she showed up, I showed her the wall of ant carcasses where I had won a hard fought battle armed with my window cleaner.  Then I showed her the bathroom, they were taking new territory.

She went outside and in less than 5 minutes, standing exactly where I had been standing, armed with only her flashlight, she found them.  She tapped on a pipe covering the cable line and they went scurrying everywhere.  Thousands of them.  She showed me how they were getting in, ingenious little buggers.  All in under 5 minutes.

She then proceeded to spray, but nothing that smelled terrible or had long scary names.  She sprayed a combination of thyme, rosemary, eucalyptus oil and some other smelly all natural things.  I was skeptical.  After all, I had already tried my own green cleaning products to no avail.  But Ashley the Ant Lady knows her stuff.  She sprayed, they retreated.

I just finished cooking dinner, and not one ant challenged me for control of my cutting board.  I am in total bliss.  No ants, no smell, no chemicals, Ashley the Ant Lady is my hero.  I can’t wait to thank her again.  She’s coming back in a month, I’ll tell her then.  Thanks Lamb Exterminating for hiring Ashley the Ant Lady, she is a miracle worker.  Gotta love those green contractors.